7 Facts You Never Knew About Your Eyes! 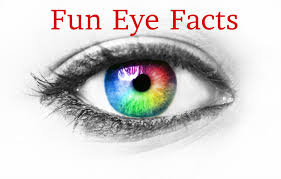 On the surface, eyes seem like a physically small part of the body.  They are, however, very complex organs that constantly perform a variety of tasks including detecting light, focusing and transmitting information to the brain.  Through research, eye doctors know a lot about eyes, including how they function and how to treat problems that arise.  While physicians may have a wealth of knowledge about the ins and outs of your eyes, there are a host of things that many people do not know!

Blinking is a vital aspect to well-functioning eyes.  The average person blinks about 12 times per minute or more than about 17,000 times per day.  Whey the need to blink so much?  Each blink helps keep the eyes moisturized so that they can continue to detect light, communicate with the brain and allow you to see the objects that are in front of you.

Although newborns are known for their cries, they are only sounds and not tears.  Once a baby reaches 4-13 weeks old, they develop the ability to cry and releasing tears can be added to their repertoire.

When a baby is born, each eye measures about 16 mm wide.  Once a child turns three, the size grows to about 23 mm wide, approaching the full-grown size of 24 mm.  The maximum eye size typically occurs when a person reaches puberty and stays that size for the rest of their lives.

4.      The length of your eyeball determines what kind of eyesight you have.

Blindness is a condition that can occur from birth, but it can also stem from an event later in life such as an accident or another eye disorder.  In fact, one of the leading causes of blindness is the presence of cataracts in one or both eyes.  While 39 million may seem like an overwhelming number, approximately 6 times that many people are living with some kind of vision impairment.

6.      The muscles that control your eyes are the most active ones in the body.

While many other muscles in the body require a warm-up in order to function at their highest level, eyes are ready to go 24/7.  This is because they are constantly working by blinking, receiving information and sending that information to the brain.  Under optimal conditions, eyes can see and perceive up to 25 frames per second.

In the same way you get sunburns on your skin, the UV rays from the sun can be equally damaging to the tissues of the eye.  Sunburn on the eye can cause damage to the membrane and/or the lens of the eye, eventually leading to permanent vision loss.  It is true that blindness will eventually occur if you stare directly into the sun’s rays without eye protection.

7 Facts You Never Knew About Your Eyes! READ MORE

I would like to express my deep gratitude to Mr. Golchin for his kindness, expertise and excellent care during my cataract surgery. He put me completely at ease during what could have been a stressful procedure. I was delighted with everything and feel extremely confident of having my other eye treated by him in due course.